The 2020 Sandific hurricane season is a current event in the annual cycle of tropical cyclone formation, in which tropical cyclones form in the Sandific Ocean. This season runs year-round, though most tropical cyclones typically develop between May and November. This is the first full season that the SHMC takes control of the basin. 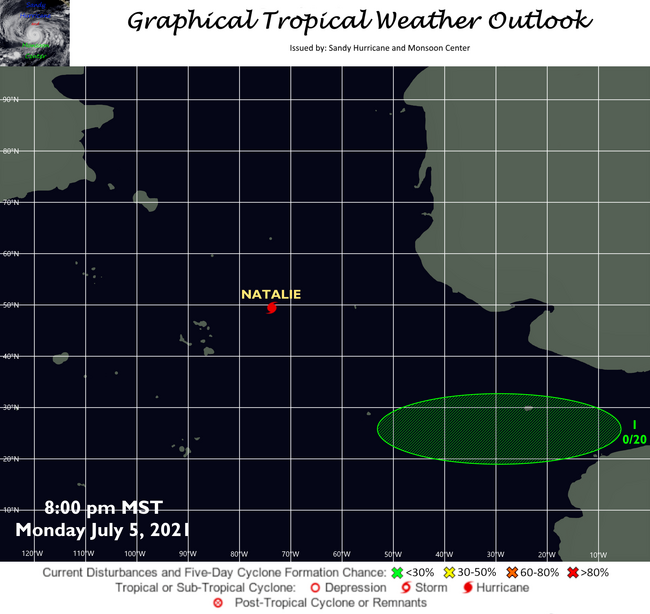 In early-February, the SHMC monitored an area of low pressure for signs of development. The area gathered convection and rapidly organized within 3 days. On February 11, the SHMC designated the storm as a tropical depression. Initially, it struggled to organize due to the waters cooling a bit and the wind shear increasing. But then late on February 13, it managed to pull through and became Tropical Storm Cooper early the next day. Once the wind shear was lessened way further, that made way for Cooper to intensify quicker, and early on February 16, it was upgraded into a hurricane.

The following list of names are in a rotating list of 100 names and are slated for use in 2020. Those names are submitted by the Sandy Hurricane and Monsoon Center and each list goes either in a boy-girl-girl-boy order and girl-boy-boy-girl.

Freda entered from the North Sandlantic basin, while reforming in the Sandific basin, so it kept the name and the designation 06S.

Jerome entered from the North Sandlantic basin as a tropical storm so it also kept the name and the designation 10S.

Retrieved from "https://hypotheticalhurricanes.fandom.com/wiki/2020_Sandific_hurricane_season?oldid=515371"
Community content is available under CC-BY-SA unless otherwise noted.