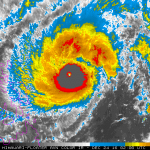 Hello. You seem to have made your way to Jdcomix's userpage. Welcome! :)

I am 13 years old, and I love weather with a deep passion. I have been on this wiki for roughly 3 months and am starting to quickly rise up the ranks on here. I am also an experienced vandal fighter on wikipedia under the same username!

Bob — Great friend, and is great to talk to about hurricanes!

Odile — Very funny guy, he is quite the master of the art of spamming chat. :P

Sassmaster — Great administrator and bureaucrat on the wiki who is very efficient with their duties. Sadly is retired.

Money — Joined around the same time as me, and is very friendly and nice to talk to! Has potential to become one of the leaders of the wiki :)

Minecraft — New user who is very nice and friendly, just like money, I think he has potential :)

Nuno — Has been involved in some drama lately, but he is very fun to be around when he isn't involved in drama!

Hype — The best bureaucrat on the wiki in my opinion, and one of the wiki's founding fathers :). He is starting to slowly become more inactive, and that makes me sad :(.

Ryne — Not as active as the others, but is still quite fun to be around.

Puffle — Has recently turned somewhat inactive, but is very funny and polite!

Azure — Don't see them that much anymore, but they are very nice!

Steve — A very experienced user on the wiki.

Keranique — Very nice user who is a welcoming, funny user on chat.

Collin — Experienced user in chat and has some of the most detailed seasons on the wiki. Congrats on becoming a bureaucrat! :)

HypotheticalHurricane — A veteran user who is becoming more active.

IceCraft — Another veteran user who has recently come out of retirement.

Brick — A relatively new user who has a lot of potential.

Ray — Another nice new user who is sadly becoming inactive.

Akio — Similar to Brick, a new user with a lot of potential.

Garfield — A user who is rapidly climbing the ranks and will do very well on this wiki, I know it.

Neutral: Nkech. Used to be one of the leaders of the wiki, became very hostile with everyone here, myself included at one point, but is getting better. He's getting unblocked this month :)

Jsky. He was a bad user, and still makes some mistakes, but ever since he was unblocked, he has been really nice to me. Still not adding him to my "friends" category, because he might still do something bad, but I'm leaning towards him being a friend.

Collin. Experienced user in chat and has some of the most detailed seasons on the wiki. However, he has recently developed some sort of attitude and was blocked for harassment towards CycloneNkechinyer.

Retrieved from "https://hypotheticalhurricanes.fandom.com/wiki/User:Jdcomix?oldid=321596"
Community content is available under CC-BY-SA unless otherwise noted.