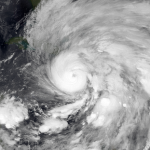 aka Sandy or Lysander

Hello <insert name here>! My name is Sandy, a rollback + chat moderator here in HHW, and I’m 14 years old. I like tracking hurricanes and all sorts of stuff since I first encountered them in 2014. I live in Southern Arizona, where I get hit by monsoons and trust me, it's hot there with temps up to 100F+ in the summer.

I am also an introvert, not talking and interacting that much in real life and spending my time with my devices and whatnot. That is why I wear glasses and that my vision is poor. I do have a speech impediment, which makes me kind of a shy person irl because I sometimes can’t talk properly. I interact with my classmates as best as I can, and I befriend some people along the way despite me being an introvert. I’m part Asian, specifically Filipino, although I haven't learned Tagalog quite yet. But I love Filipino cuisine, it's delicious! I'm a straight A student and a nerd at math.

I visited this wiki back in 2015-2016, when I saw the pages that Bob had created, the userpages of StrawberryMaster and Odile, and all that kind of stuff. I also have a Wikipedia account, which I use to edit tropical cyclone pages and *formerly* reverting vandalism in Wikipedia. My Wikipedia account is right here: Sandy14156

Arizona is one of the only two states not to observe Daylight Savings Time. Therefore, the clock remains at UTC-7 or Mountain Standard Time all year round. Current time in Arizona: 03:22 (MST)

If you have any questions or concerns, let me know in my message wall. I may not answer all your questions, but don't be afraid to ask! :)

Credit to Bob for making this original infobox.

In Southern Arizona, I get hit by remnant lows that were once Pacific hurricanes. Here are the storms I experienced since 2014.

On January 16, a tropical wave originated off Africa and onto warm waters. Abruptly, it rapidly organized starting on January 20 and on January 24, it strengthened into Tropical Userpression Four. A couple days later, it intensified into a tropical userstorm, and was named Sandy. During the months of February and March, it entered an area of low to moderate wind shear, causing the system to slowly intensify. The userstorm then entered an area of low to no wind shear and warmer waters in late May and early June, which contributed to the strengthening of the storm. It finally intensified into a severe tropical userstorm on June 11, the third one of the season. It strengthened gradually over time, further becoming a Category 1 usercane on September 14, the second one of the season. Sandy intensified into a Category 2 usercane on January 26, 2020.

As of April 25, 2020, Usercane Sandy is located in the Western Tropical Atlantic. Maximum 1-minute sustained winds are at 105 mph (165 km/h). The minimum central barometric pressure is 967 mbar (hPa) and the system is moving northwest at 4 miles per day.

All of the names' storms

Retrieved from "https://hypotheticalhurricanes.fandom.com/wiki/User:Sandy156?oldid=471212"
Community content is available under CC-BY-SA unless otherwise noted.